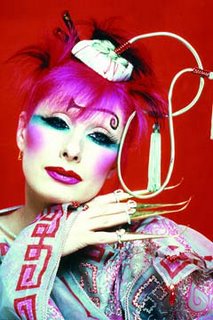 There is no rest for the shoppers. It is just January 1st, and already Vogue UK reports that the first unmissable fashion sale of 2006 will be held on March 8th. The vintage fashion auction titled From Fortuny to Westwood boasts a lineup of over 200 lots with the usual farrago of covetable vintage designers- YSL, Hermés, Westwood, Ossie Clark- as well as wedding dresses by Christian Dior, and the delightful Zandra Rhodes (pictured above).

Also going up for auction is a Fortuny Delphos gown... being 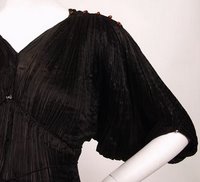 slightly obsessed with historical clothing, I would love to see this. In case you aren't as fanatical about vintage gowns as moi, the Delphos gown- designed by the Spanish artist and designer Mariano Fortuny- is a famous style inspired by chitons worn by women in Ancient Greece. There were variations on the gown during the decades it was worn (from 1907 through to the late 1930s), but essentially it is a simple column dress of pleated, hand dyed silk. 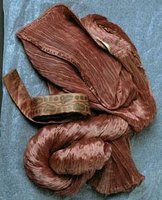 The gown was stored twisted tightly into a ball, and packed inside a silk pouch (perfect for travelling!). It was worn by some of the most avant-garde and daring women of the early 20th century (it freed them from wearing a corset- quelle horreur!)