party of the year (I know it is only May, but I have never seen so many fashionable people under one roof, and doubt that such a sight will be repeated this year... fingers crossed though). I was glad to see so much Burberry and Alexander McQueen on the red carpet- appropriate of course, given that the theme of the night was AngloMania, and Burberry's Christopher Bailey was cohosting. Although there were a number of well dressed actresses and designers in attendance (many of whom arrived on each other's arms), the stunners for me were the models... 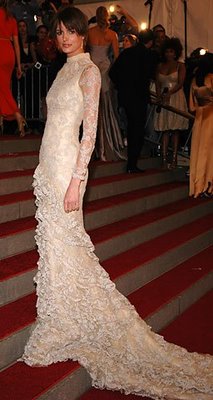 Models- left to right from top:
Daria (in Emanuel Ungaro), Erin (with and in Matthew Williamson), Jacquetta (in Alexander McQueen), Lily, Gisele (in Dior HC), Lily and Gemma (both in Mcqueen)
Posted by la femme at 1:12 a.m.

My favorite was (Some Red Head Socialite on the Arm of Zac Posen)'s Zac Posen gown. Gorgeous, the cut was so fresh.

There were also some lovely Marc-y Marc gowns, surprisingly. I'm normally opposed to that man as he mostly makes un-sexy clothes for 30 year old girls.

I think you mean Jessica Joffe- her gown was interestingly cut. Zac looked like the perfect party date!

Lily looks awful, as per usual.