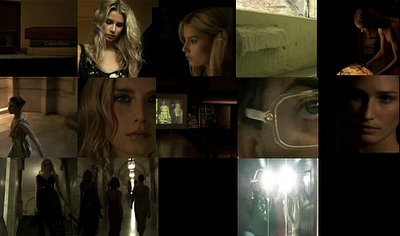 The CFDAs took place on June 5th, but [via missDior] I just recently watched the mini film that was presented prior to the bestowal of Womenswear Designer of the Year award . These films seem popular at the moment... Erin Fetherston created one for her collection and Zac Posen brought his new designs to life in Ma Vendeuse. The CFDA short stars the stunning Eugenia Volodina, Natalia Vodianova and Hana Soukupova, wandering around every inch of the gloomily lit New York Public Library, their long gowns (by Proenza Schouler, Francisco Costa, and Marc Jacobs, respectively) trailing behind them. Bjork's Bachelorette is the perfect accompanying track.

Several of the mini fashion films I have seen in recent months share similarities in that they feature ethereal looking femmes swanning around dark and curious locations that would otherwise be quite creepy, but are made beautiful due to their 6ft tall, couture clad inhabitants. I always wonder where they are meant to come from (the femmes and the dresses) because there is never any one around except them and miles of empty, candlelit corridors. It is like a melancholy version of Alice in Wonderland, but with much better clothes, and minus the white rabbit.

The CFDA film will be available from iTunes soon, but can be viewed now at dna models - women - Hana Soukupova - videos.
Posted by la femme at 1:22 p.m.