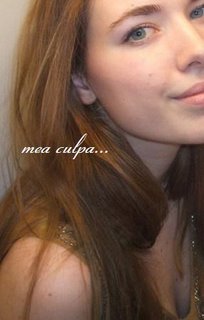 Oh dear, I have been back from my highway rampage for several days now and proving a lackadaisical blogger. Thank you for the notes of concern*. I'm afraid my excuses for being elsewhere are too mundane to bother articulating, so I'll just mention a few of the items I missed musing over in the last week and hurry up in getting my boots back in gear for this one.


1. There is a new muse in town. She is Spanish and could be described as a cross between the current reigning ingenues, Cory Kennedy and Valentin Fillol-Cordier. What makes this femme special to me is that she decorates her eyes with rhinestones like the club-goers of Reykjavik (and yours truly, on occasion) and can pull off mustard coloured tights like nobody's business. Ladies and gents, meet am_lul:

2. Penguins! They seem to be everywhere at the moment. Perhaps it is just a matter of paranoid perception, but not since living in South Australia (where small, flightless birds known as fairy penguins toddled around the beaches) have I seen so many of these creatures. I just bought penguin toys as presents for cousins after seeing not one, but two feature films starring the adorable Arctic dwellers, and then last week I switched my wall calendar to "December" and was met with the stare of a fuzzy penguin chick nestled comfortably under her mother. Most recently, I came across this dress while perusing the sales at built by wendy. It would be tricky to pull off in a chic rather than cute manner, but I'll take silvery penguin over olive ostrich any day. 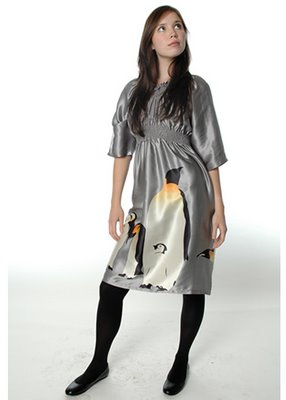 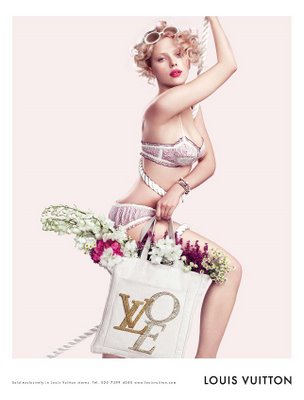 (as illustrated to optimum effect by Scarlett Johansson for Louis Vuitton)

Kind of like a modern Marie Antoinette. I'll leave the pink hair (unless it is cut into a bob like Natalie Portman in Closer) but definitely take the white sunglasses... 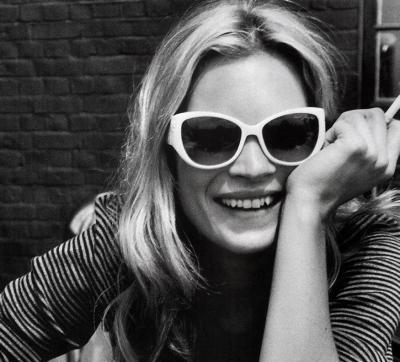 * "Send us a proof of life to assure us you haven't been kidnapped by a marauding band of fashionistas" Ha, if only I was so lucky. Thank you though, BB. I am certainly lucky to have such readers!

Glad your back! The LV ad is amazing! And that bag....

Relieved! I must be watching too much Law and Order (or do I mean the nightly news?*) so I worry about these things. But I/we (the blog readers squealing for more, more, and more) don't mean to be a burden. Everyone needs to take a break from time to time, especially in a good cause ;-)

* This morning I heard a story on NPR about a Russian soldier kidnapped in Afghanistan 20 years ago but who then went native and has been living there ever since. I was doing the transposition in my head as I listened: "When she first got here she wouldn't throw out the trash in couture gowns or hadn't signed the pledge of allegiance to 6 inch heals. But now she's one of us...."

The spanish girl looks very stylish, I hope she can do something more than Mrs. Kennedy.
I like very much Kate's photo, she looks really happy.

I was just thinking about Natalie's hair in Closer, and must admit that I am a big fan... I'm definitely in the same boat in regards to the white sunglasses... they've certainly been all over the place lately. Welcome back

You have some excellent pics here.

it upsets me that i don't have pale or english rose skin like almost EVERYONE around me here in the UK, so i really can't pull of that milkmaid look. unless pale pink goes with yellow/tan skin, then i'm pretty much doomed.

Great to have you and your musings back!!

i was missing you! welcome back :)
i visited am_lul fotolog and i felt deeply in love with her. Thanks for sharing that!

someone to be checking out...

Hi. Your blog is great ! Are you interesting in a link exchange with my blog ?
Marina (from France)

1.- i heart penguins.
2.- i heart scarlett johansson because she looks like a woman, actually... besides the fact that she's really talented...
3.- kate moss/white sunglasses: gorgeous!

the scar jo thread-->you have such a great eye for these things, girl. you deserve to hear it over and over again. keep it up!

oh my I just have found am_lul recently and got to this post by googling her...have posted about her too today. check my blog out if you find the time and like to :) hope u will!