Tom Ford will forever be one of my designer deities because of the stunning collections he produced for Gucci and YSL over the past few years. However, I'm not sure what to make of his career since leaving the fashion houses in 2004. For Ford, sex and style are inextricably linked- he incorporated erotica into previous ad campaigns (most famously in the spread with naked Sophie Dahl for Opium perfume), and described the difference between Gucci and YSL in this 2001 quote from Vogue UK:

"Historically, [Gucci] is Sophia Loren. Yves Saint Laurent is Catherine Deneuve. They're both sexy. It's just that Gucci is a little more obvious than Saint Laurent. The YSL woman might tie her boyfriend up and drip hot wax on him before they have sex, for instance. The Gucci woman is just going to have sex." 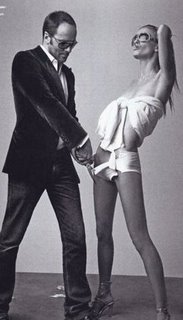 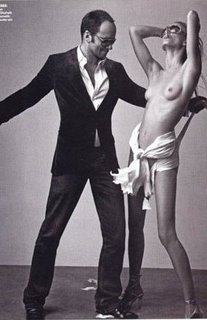 Shots from Ford's femme-bot/boy toy spread in W mag can be seen here. And he is currently finishing a stint as guest editor of Vanity Fair's (surprise!) all nude Hollywood issue.

I´m totally agree with you, sometime he seems to be obsessed with nudity, and not always nudity is equivalent to sexy or atractive.