Julie from Coutorture lent me her digicam to get a few shots at Marc Bouwer yesterday... gaining entrance to the show was quite funny- the ticket I had was only supposed to get me into the queue of students etc destined to stand in the backrow, however, Patrick MacDonald happened to be right next to me as I headed for said "lowly lineup", and in a squealing effort to get first dibs on Mr. MacDonald ('PATRICK, how ARE you?!'), one of the meet and greeters knocked me sideways into the VIP line she had been guarding.... and right next to Ivana Trump!

So, the show.... many swimsuits with attached capes, tails etc. Looks quite "Empress of the Beach" if you are a leggy blonde model, but not so attractive if you are a mere human. 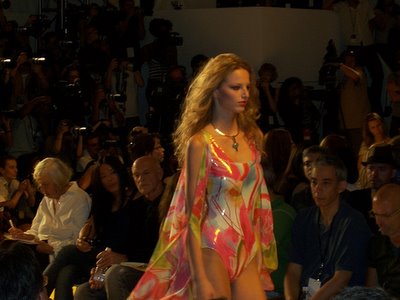 I was completely enthralled with the woman sitting in the bottom left hand corner of this next photo. She was fabulous- black bustier, rhinestones galore, and a giant Queen Amidala type hair piece attached to the back of her head. Like a goth Patsy from Ab Fab. 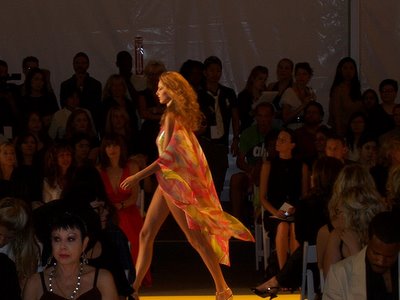 Ajuma (below) was incredible striking in person. As you know, I love my Eastern Europeans, but the ones on the runway were so thin that their hipbones seemed to slice through the fabric that covered them- they looked as though a decent gust of wind could blow them away. In comparison, A looked powerful- as if she was ready to run a marathon after the show. 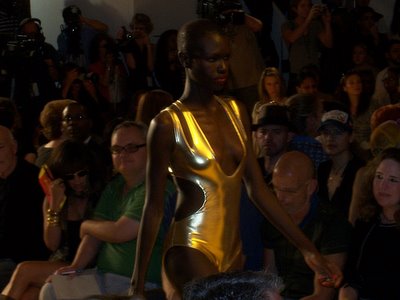 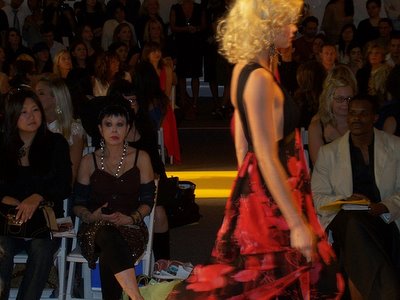 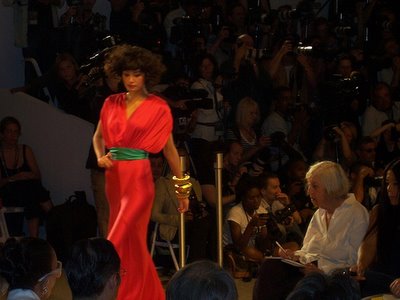 After a lot of shiny spandex that could only work on a Brazilian Beach, or Roberto Cavalli's yacht, there were a few bright jersey dresses, and then the mood semed to shift to Imperial Russia(?!), as evidenced by the next photo. Beautiful. It seemed a little out of place for a spring/summer collection, but being a Siberiette, I have no compaints... 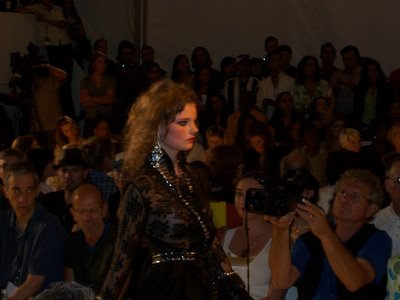 Va va voom. I love the combination of purple and volume. And Catriona Balfe of course. 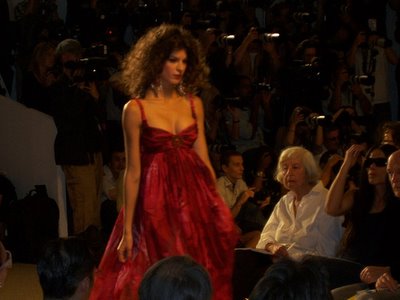 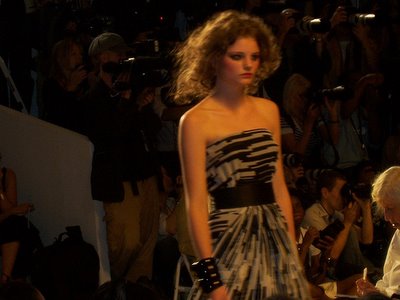 For those of you who are fans of Mexican cinema, that is the back of Gael Garcia-Bernal's head in the front row (wearing the white shirt- to the left of the model in blue). 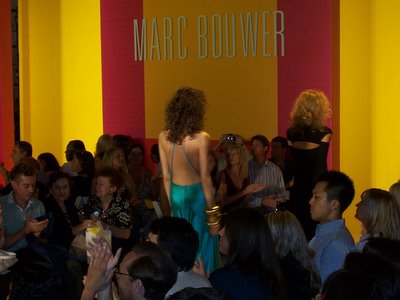 Many more FW pictures -including the rest from this show- can be seen here.
Posted by la femme at 1:18 p.m.

Your "goth Patsy" brings to mind a line of a bard from a previous generation, something about ...her fog, her amphetamines and her pearls...but really I appreciate anyones attempt through style and expression to make the world a lovelier and more interesting place

dani: thank you for the correction- that was so stupid of me!

gahhhhhhhh gael garcia bernal! GAHHHHH. i am (not at all patiently) waiting for the science of sleep to come out so i can ogle two of my very favorites, whose sweet, innocent, ingenue qualities have coincided with the superpower that is michel gondry to make one superpower movie about love and beauty and imagination. sighhhh.

love your posts, thanks for making us feel like we, too, are part of fashion week : )

i was in sf all weekend and have just now had the time to read thru your blog, and whew! i missed it.

glad you're happy and surrounded by "all lovely little THINGS," in the voice of ed & pats.

I agree, Gael Garcia Bernal is dreamy! I hear he likes the Sex Pistols...*sigh*