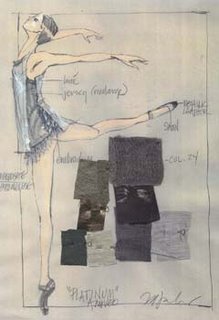 The costume for the final ballet performance I danced in consisted of a black leotard and pale pink skirt, tights and shoes. Far from fulfilling my Degas inspired fantasies of swirling around the stage in a rich and elaborate tutu, I ended up in an outfit nearly identical to the one I had worn in ballet class at the age of 7.
Admittedly, this unimaginative ensemble was a considerable improvement from the white curtain panels that we had pinned around our bodies for a barefoot 'experimental' performance several months earlier, but I was still hugely disappointed. To me, ballet is the ultimate work-for-clothes-tradeoff. The femmes who spend years training to contort their bodies and totter around on bandaged tiptoes are rewarded with a fantasy outfit to wear when they finally get to perform for a paying audience. My fantasy outfit involved a boned bodice, several yards of embellished tulle and red pointe shoes (similar to Lacroix couture), but I would certainly have settled for a costume specially designed by Marc Jacobs. Such is the fabric fate that awaits the lucky dancers of the Garnier Opera in Paris. French Vogue reports that MJ has been commissioned to create 42 short dresses for an upcoming performance entitled 'Amoveo'. From a practical perspective, this is even better than a lush tutu because each dancer can wear her costume to the afterparty with her MJ ballet flats!
Posted by la femme at 4:20 a.m.

You did ballet? In what capacity?

A post I can relate to so much , I have got the tutu though :)but's it's no Lacroix twin sadly. How long did you dance for?

Oh, that is just not fair... it makes me want to be a ballerina, again. Too bad you and I are too tall!

In my last modern dance performance I wore black tights and tank top. Simple attire, but sufficient for this conjurer's Art. Its true. Dance is spellbinding. I have had a bit of a crush on every female I have ever danced with on stage or even watched dance on stage...ever (at least while they were on stage).

It is appealling to watch people move, any movement: dancing, rock climbing, swimming, skiing, running, walking. Clothes in general should allow people to watch. Dance clothes should invite people to watch, and I suspect the MJ pieces go beyond that; they will create a desire to watch. The ballerinas who wear these will make short work of me should I see them dance. I envy the danseurs of the Garnier Opera of Paris.

Oh how I can relate!! Degas was why I became a ballenrina as a young girl. I, too, loved the costume-- but by the time I was old enough to graduate to toe shoes-- they were banned... so I never did get my Degas costume either... but everytime I wear ballet flats-- it takes me right back!!

Say, are you a model? I want to buy the Nylon Book of Style. I think we were twins in another life. =]

oooh, ballet flats. i love them. every girl/woman wears them here in paris. most of the time with tights or skinny jeans. so lovely. so parisienne. ;-)

hey adeleine!
i actually have many digicameras b/c i'm a photographer but the one that i've been using the most when i'm out and about is the canon rebel xti that just came out this fall. (the xt model is the older version). it's relatively light and portable so carrying it around on a regular basis isn't that much of a burden. :) thanks for your comments!

Oh wow bella I had no idea you did ballet - and now I can't think of you not doing ballet, it's a perfect match.

Am sure you looked stunning and performed equally so. And I love the idea of an MJ-desigend ballet outfit paired with ballet flats, too adorable.

Perfect post!! Do you have a photo of yourself at the age you danced?