This trip to Germany was mainly about meeting extended family, with a couple of day long adventures to explore on our own. Andre is from the southwest part of Germany, so close to the French border that you can drive over for lunch. The Black Forest was the highlight of the trip for me. We stayed for a few days at a little B&B at the base of the Kandel Mountain (1250 meters - one of the higher peaks in the forest), and went all the way to the top one day, which was magical and eerie. The forest was dark and enormous, with thick mist that seemed to change colour depending on our altitude. It was a shock to finally emerge at the top and hit sunlight again. I could easily imagine fairy tales coming out of that place.

To keep things simple, I used my iPhone 3G as my camera. Also to keep things simple, I allowed my Canadian cold weather judgement to be clouded and only brought one pair of leather boots (plus a backup pair of 5 inch stilettos- for stylish snowshoeing?). Apparently the boots would have been fine most years, but with the snowstorms in Germany, it meant very wet and frozen femme feet. Next time I'm bringing heavy duty yeti boots. As for the stilettos, well, they were a source of amusement at least...

Freiburg is centered around the Munster (cathedral) and surrounded by the Black Forest. The older parts were overwhelmingly Catholic, but it is also a university town with a lot of students, making for an interesting mix of medieval and modern. 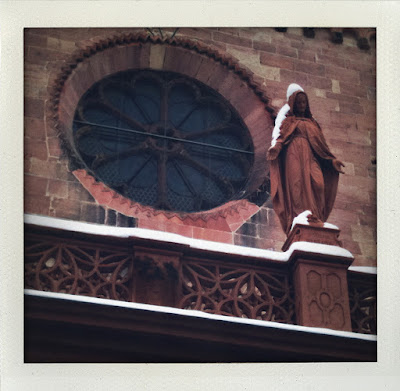 The Munster is famous for its Gothic spire, however that was covered up for restoration during our visit. The statuary and grotesque water spouts were a lot of fun to hunt out though. 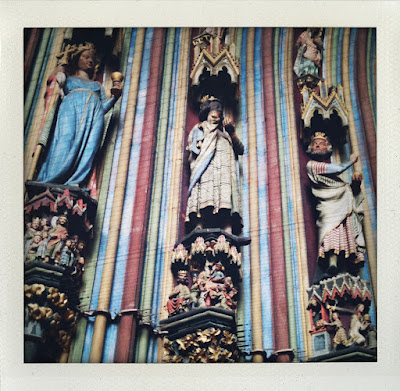 The Farmer's Market set up around the Munster was wonderful. It ran most days, starting in the early morning and going to about 1 pm. I was too busy tasting honey and admiring the wild "cuckoo" type clocks to take many photos, but if you can get there, I recommend it. Some of the best street food I've had since India. 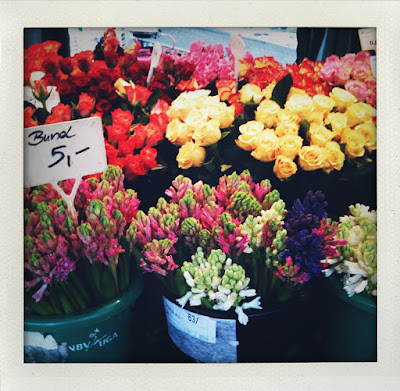 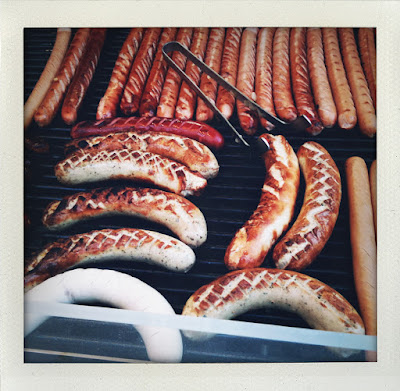 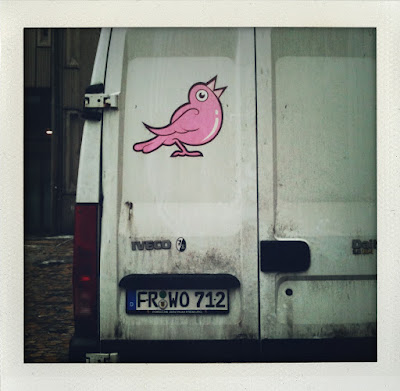 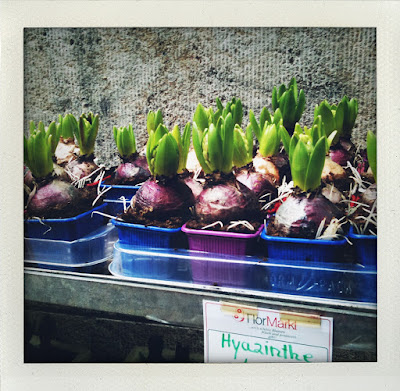 One of the many medieval alleyways... 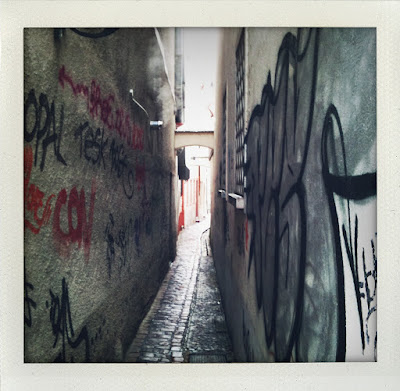 Tree decorations left over from Xmas. The trees I saw on the streets and in people's homes were sparsely decorated, with a theme of either red or white balls paired with straw or paper stars, or plain trees with candle lights on the branches. 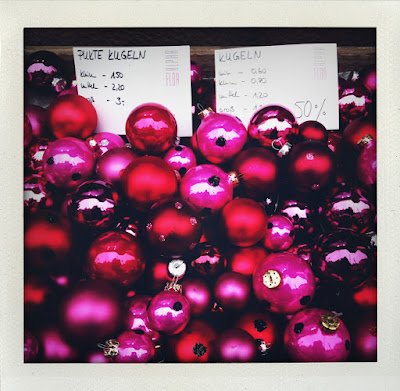 Maneki neko waving at passerby... this shop was right beside the residence of Erasmus, where Marie Antoinette reportedly stayed one night on her bridal journey to meet Louis XVI. I had just finished an essay on Erasmus before the trip, so it was surreal to pass by his house while ambling around the streets. 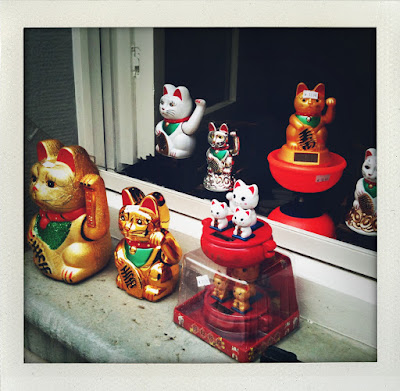 The ochre building on the right is the Augustinermuseum (main art gallery in Freiburg). It is mostly filled with Catholic artifacts, but the top floor has beautiful 19th and 20th century paintings of Black Forest culture. 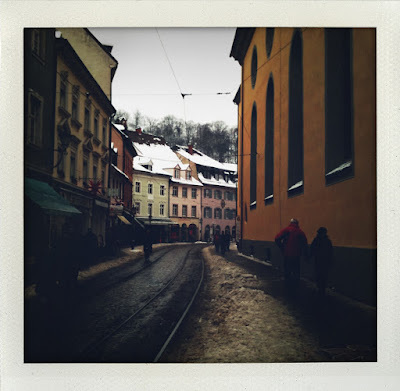 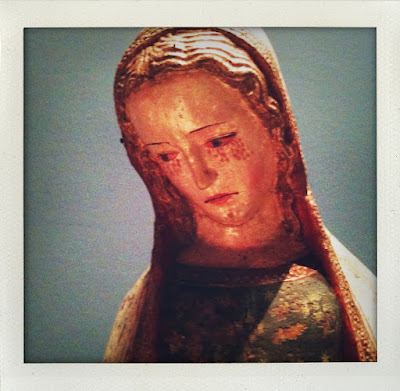 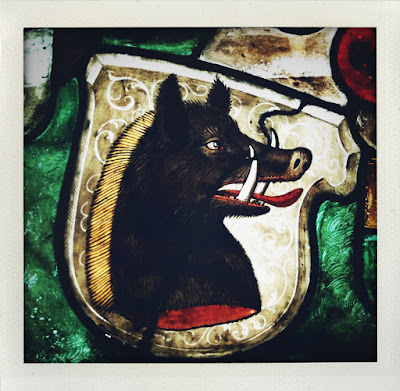 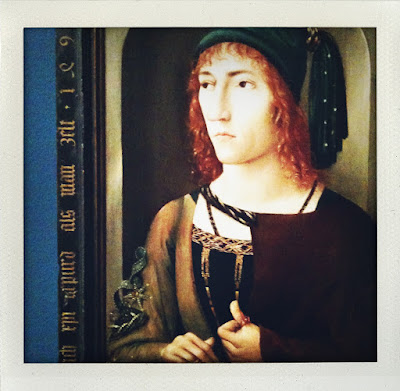 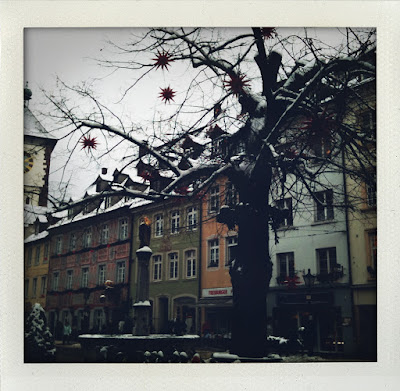 My favourite place in Freiburg after the farmer's market was this tree strewn with red stars. Andre thought is was hilarious that every day we'd go walking and wind up at this tree. There is a gorgeous old hotel founded in the 12th century on one side of it (next picture), and some fun shops on the other. But the main attraction for me was the tree... 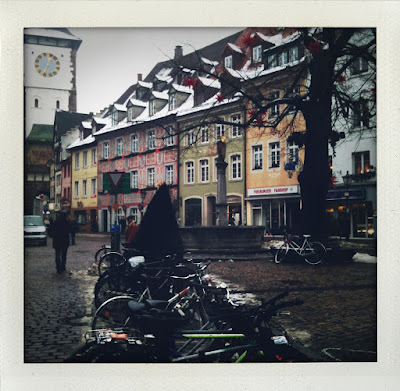 Oldest hotel in Freiburg. It was founded sometime in the 12th c. I love the gold boar. 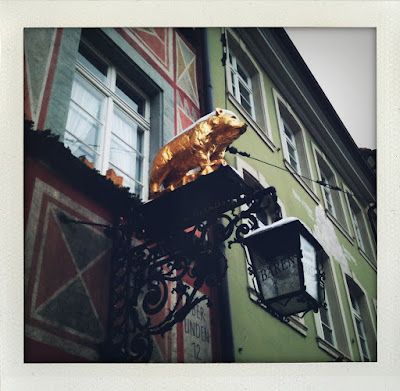 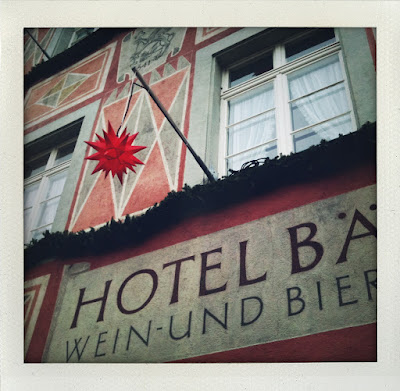 Many of the businesses have an animal or object symbolic of their profession tiled into the ground by their door. Cloth cutters have scissors, shoemakers have a boot, bakers have pretzels etc. I was told that the pebbles used in these designs (and throughout the streets of Freiburg) are from the Rhine and a particular style of the region. 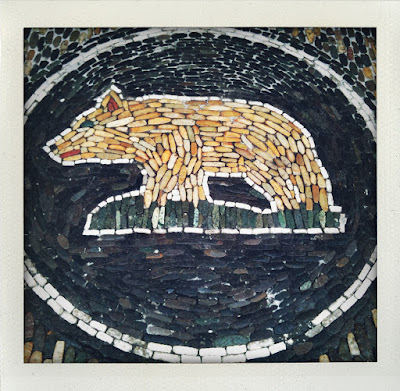 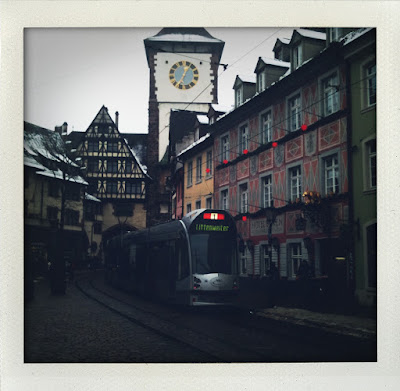 New Years pretzels being wrapped up- very delicious with beer. 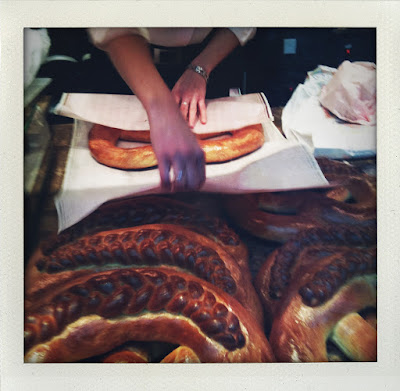 View of the Martinstor, one of the original gates that marks the wall of the old city. 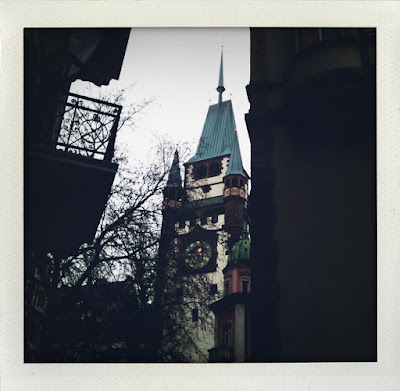 My first New Years Eve with bottle rockets and champagne in the street! 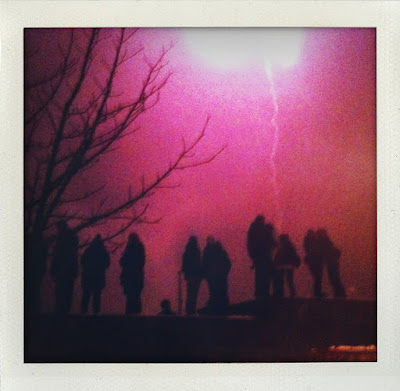