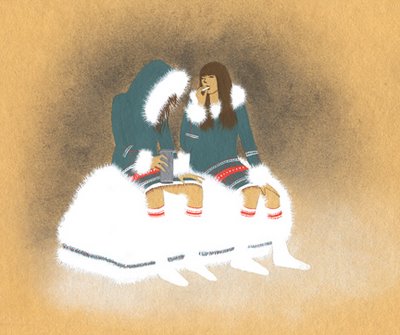 It is starting to get cold in Canada, and as always happens on these fine, increasingly freezing mornings, I am faced with two options:

1. Huddle deeper into my wondrously fluffy duvet, ignoring work and classes (and the cat pawing at my head, desperate to be let out onto the balcony), or
2. Hopping up like a good Finn, pulling on my Laplander hat and heading off into the working world.

I don't need to say which option is more appealing. Today however, I am cheerful putting on my vintage Inuit coat and warm boots, as I have just recently discovered the drawings of Rachell Sumpter, an artist whose work exactly captures how I feel on these cold mornings.

I love Settle Down (top), because my old coat is similar in style to the ones worn by these femmes, but I am also curious about what their story is- in much the same way that I usually wonder about the lives of people I see on the subway, or pass on the street.

The picture below is my favourite... the idea of having a giant snowy dog to ride around the city on is too wonderful. Particularly if you get to wear embroidered, curly toed boots. 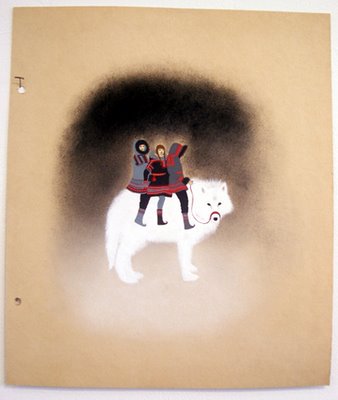 Waiting for Cassiopeia, another drawing, is such an intriguing mix of traditional and modern. I love how the women embrace and smoke in a modern Western style, yet wear traditional tribal garments.

On a side note, Sumpter's work was displayed last week at an exhibit entitled Frizzly Gur, and I must say that the attendees had cool taste in T-shirts... 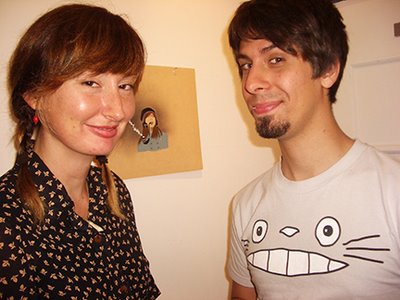 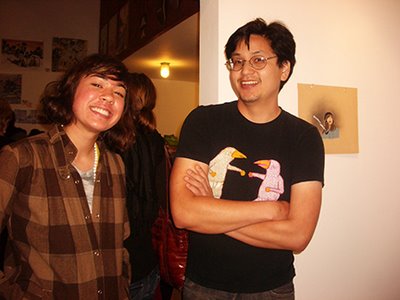 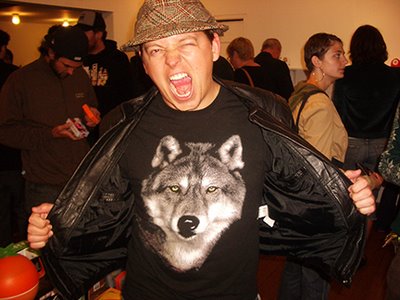 .mmm. all things warm and fuzzy make up for the harshness of winter...

Rachell Sumpter is one of my favorites, too. I love the prints in her New Wave series!

Ooh these pictures make me really look forward to winter. I can't wait for chunky scarves and leather gloves and hearing the scrunch of snow on the ground. And steaming hot chocolate with marshmallows after a day in the cold.

Now, now. Let's not perpetuate too many myths about Canada. We *do* live in igloos and hunt and trap for dinner, but we don't all wear parkas, no matter how stylish. Or is it the reverse? Cheers, BB (formerly TOB)

We're on the trail of the thoughts of la Femme (which we all seem to have a wont to do) as she lie proped up in bed, refusing to get up, bundled in her cuddling and coddling duvet. Her prasine eyes peering over the window casement past the emblazoned trees down the receeding road. She wonders about a winter wardrobe. No flimsy fichu for la Femme (la Finn?) who lives north of the 54 40, but great Icelandic coats. Fur perhaps...kotik...vihuhol?
"No" she says - just like that, "only on big snowy dogs and friendly felines."

you have a myspace no?

misssixty: It has been a fantasy for me too since reading Philip Pullman's 'Northern Lights' (age 8) where the young protagonist rides a polar bear in the Arctic. I'd like to get a huge husky/malamute dog one day- even if I can't ride it!

bb: Haha, when I went to school in Australia, I told my classmates that some people chose to live in igloos in Toronto- and they believed me!

OH MY GOD!!!! I HAVE THAT T SHIRT!!! the light blue one with the "cat face" as people call it is a TOTORO from the hayao miyazaki film "My neighbor Totoro" (its an adorable anime) mines a girlier cut (getting kinda small lately :o....

I love these pictures. I hate the word whimsical, & they're much more than that, but it captures the style they have. Wish I could have been at the show.

I simply adore your blog, mademoiselle.

That cat shirt is pretty wicked, as are the wintery drawing. Very reminiscent of the cuddly feeling that flannelette sheets give.